Who are the top performers ? 4 types of employees who work in your company 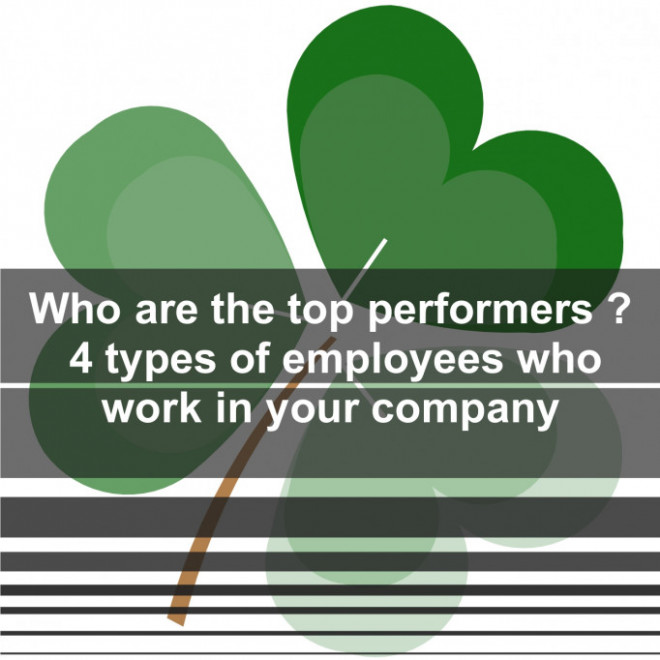 In the 80s, Jack Welch, CEO of General Electric, described a system for categorizing employees - “20-70-10.” 20% are the most productive, 70% were middle peasants, and 10% are worthless workers who should be fired. Using this system, Welch was able to increase General Electric's profit by 28 times. Later, the system was renamed to "ABC-players." Interesting? Let’s go.

According to his classification, company employees can be divided into 4 types:

C - employees who do not share the values ​​of the company and show low results (Welch advises: to dismiss them as soon as possible)

B - do their job well, but do not support corporate culture

B + share the values ​​of the company, but may not reach the performance level, in the right environment they can grow into A-players

Let's start with the "C-players". These are toxic people of the company who do not show results and do not correspond to your values. They only spend time at work: 5 times a day go out for a smoke break and drink coffee. They always find the cause of complaints: screaming boss, hated work or boring employees. Such people negatively affect the team and relationships in it.

What's wrong? Perhaps the person is not in his place, did not find his calling. And work is just a way of getting money.

What to do with "C-player"? There are 2 options.

- Give a second chance in another position where he will show his talent.

"B-players." These are dinosaur people (in good terms), they are with you from the very beginning. Stable employees who know about the work of all departments of your company. They fulfill all orders on time. Everything seems to be in order? But!

What's wrong? They will not come to you with the initiative to develop the company in the framework of the position. And sometimes you still need to persuade them to complete a certain amount of work. But still, you can work with such employees.

According to Welch’s system, both C-players and B will never rise to higher categories.

The category “B +” is a transitional link; they do not stay in it for a long time. Its inhabitants are beginners, students or changing the scope of activity. Just came to the company, caught fire, but the result has not yet been achieved. Their values ​​coincide with yours, and they are ready to work.

What to do with "B +"? Give them a good mentor. Indeed, such employees usually have 2 development options: 1. If they are not in their place, they burn out and pass into category “C”. 2. If in the right place - they grow and become an “A-player".

And finally, "A-players." Outstanding people who are 100% passionate about the idea and live in company. They read a lot, watch, listen. In each new person they see a source of ideas and information. They try to get the most out of everything around them. Unlike “B” and “C”, “A-players” are not afraid of competition, therefore, people who are similar to themselves will be hired. A player of category "A" may be employees of any position. Even a cleaning lady! She will develop in her field, recognizing all the subtleties and secrets of her work.

Can I learn to be a top performer ? I think that only the level of energy is congenital in a top performer. Everything else is awareness, self-development and the right environment.

What to do with A-players? They cannot be managed or framed.

There is another side, top performers are more prone to burnout than others. If they have not yet learned to work with their internal resources, and the company does not pay due attention to this, there is a risk of losing a strong employee.

What to do with A-players? Invest in them, remove all obstacles and send them to swimming. Then they will return with sound booty.

For strong employees, the lack of micromanagement is important. They should be surrounded by other, equally strong employees. If the company ceases to hire top performers, you need to be prepared that the current ones can leave.

On the interaction: Players "A" and "B +" - an excellent team. The first will be an ideal teacher for a beginner and, as a result, will drag him into his category. But “C-player” is their exact opposite, with which they do not get along at all. Therefore, in a conflict between them it is worth thinking about who to sacrifice.

Summing up, let’s say that there are different opinions about the ranking of employees. Someone is a supporter of this system, because everything is laid out on the shelves. You can control and increase the level of employee health. And there are those who do not perceive it at all. Indeed, such an assessment of people can play both positively on their perception and negatively, worsening performance. Yes, and Jack Welch said that these distributions are not always accurate.

Among the well-known companies that currently use the "ABC-players" system: IBM, Yahoo, Amazon and others. And those who abandoned it for various reasons: Microsoft, Adobe, Ford and General Electric.

How to Implement HRMS Successfully: The Complete Checklist

How to Improve Employee Retention: 7 Retention Strategies for Employers